Fresh herb butter is easy, finely chopped fresh herbs and butter,  or you can use margarine. If you are making herb butter with fresh herbs be aware they have a shorter fridge life,  the herbs …

Today being friday it’s easy dinner night.  BLTs,  there is nothing like a home made sandwich of freshly cooked bacon, crisply shredded lettuce topped with a couple of thick slices of a tasty tomato.  I …

A birthday to celebrate last night, my youngest turned 19.  I made my first lamington cake, it was a challenge well met.  Not only did I make it a cake, but a chocolate lamington cake. …

Just for something a little different, when I made my sausage rolls today I didn’t use the usual roll and cut with the  overlap on the bottom. After a little egg wash/milk on the edge …

I say oreo but in reality you can use any biscuit that fits in the bottom of your cupcake papers or silicone moulds. Split your oreo cream biscuit and pop a half, cream side up, …

Scrub up your scissors

Cutting foam double sided sticky tape is always messy on your scissors, at least for me.  Pretty soon they start to stick to pretty much everything you try to cut. Even the thin tapes will …

I’ve made the traditional vanilla lamington and a chocolate lamington so for this years Australia Day I made a marbled lamington, the best of both worlds really. Making up a vanilla butter cake and a …

This technique is relatively new to me I like learning something new. To use those old but not totally dried up felt pens as water colours.  If you have felt pens that are newly missing …

Sometimes I only want half a sheet of frozen pastry, bending and snapping does not always have a great outcome and does not always leave you with usable pieces. The only way I’ve found that …

We love a good chicken parmigiana in this house.  Last night I decided this is what we are having for dinner but in reality I was to lazy to do the chicken crumbing portion of …

I ran out of onion powder I use this mostly for my seasoning mixes, there were no onion powder refill packets at the grocery store but there were onion granules. I bought the granules and …

Self raising flour, why do I keep that in my cupboard along with plain flour, easy, it’s a similar price as plain flour, (all purpose flour) it sits beside the plain flour in the shops, …

I bought some small chocolate cups to make a special snack for Christmas day but everyone bought not only a salad but a sweet of some sort so I didn’t end up making these.  Yesterday …

What to do with a box of savoury crackers that are mostly broken or crushed or even a little stale? Pop the broken crackers in the food processor and give them a blitz then coat …

I love a recipe that you can get more than one variety out of, like cakes, muffins and biscuits. By more than one I mean make one big mix, and what I call divide and …

I found a recipe for flapjacks they seem to be a sort of UK version of ANZAC slice so I decided to give it a whirl just to compare. I’m pretty sure I converted the …

I’ll let you know that the first thing you do before using a page out of a book or dictionary is to read what is on that page, you don’t want inappropriate print for the …

I like the idea of protein balls but a lot of the time when you look at the recipe it has a whole lot of expensive ingredients that I don’t normally buy, I want a …

Steamed potatoes, changing them up

We love the humble potato there are lots of them to choose from and there are different potatoes for different jobs. I don’t go into it to much I am by no means that knowledgeable, …

I was over at my mother in laws the other week and I noticed a couple of these containers (see pic below) sitting in the sink. As a throw away comment I just said,  you’ve been laying the marg on thick to be going through a couple of containers at a time or have you been cooking up a storm?

Her reply was, no I use them as my freezer meal containers, that one’s spaghetti bolognaise for Roger and that one is shepards pie for me I’ll cook up some vegetables to go with it.

I thought that was a really good idea as they only have a small freezer and these containers stack well and are the correct portion size for them. Easily replaced if broken.

Her hints are to label well. If your food does not fully take up the container press a bit of cling wrap on top of the food.

Don’t put containers in the microwave, they are easy to run under some hot water, invert and pop out the food into a suitable heating container if not defrosted.

Use what works for you.

No particular reason for this brand except that it was $2 at my local grocery. I’m not vegan nor vegetarian. This is based on soy.

I decided to give TVP a try simply because at the moment fresh vegetables and meat is  getting quite  expensive and I wanted not exactly a total alternative to meat but a way to bulk it out and still keep the meal filling.

Things I learnt and what I did to make my meal below.

TVP needs to be hydrated and it needs flavour. I used equal amounts of hot stock (using a cube) and TVP in a bowl, let sit for 5 mins or so giving it a stir and covered.

While that was sitting I made my spaghetti bolognaise as per usual but only putting about 1/4  the amount of beef mince in. When all was ready and gently simmering I mixed in the hydrated TVP and let simmer for as long as able to absorb all the flavours.

My hubby didn’t notice anything amiss so I’m guessing that this meal was ok and served with garlic bread as usual.

Will I use again, yes.

I think for the moment I will keep it to meals with sauces like spaghetti sauce, lasagne, taco, burritos or maybe my next try will be as a savoury mince.

From what I can gather there is a different way to prepare  the TVP, different stock to TVP ratios for things like rissoles, meatballs, hamburgers, meatloaf etc.

For now I think I’m happy with how it’s going. My meat to TVP ratio will probably change as time goes by.

Let me know if you’ve given textured vegetable protein a go. 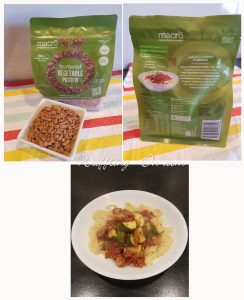 I always have frozen corn niblets and peas in my freezer to me they are a life saver. I do buy them fresh when in season sometimes but mostly these are my go to frozen veges.
I do also have frozen broccoli and cauliflower in my stash but I mainly use these for soups, casseroles or vegetable bakes.

I have to say that after the recent floods/petrol hikes and COVID and the lack of availability of fresh items or the dollars being charged to buy my favourite items I’m doing a bit of a rethink on my frozen vegetable usage.

Trying to keep the frozen broccoli and cauliflower in the best eating condition I’ve found that you need to steam them in stove top steamerpot/insert and cook them to just al dente or they go mush when serving. The best outcome for all I think is to steam to serve, and if they are a little overcooked I’ve found grated cheese, white sauce  or gravy over the top hides a few of those serving sins lol.

Have you had to rethink they way you buy your groceries, green or otherwise?

My fresh vege I always try to shop local but sometimes that’s just not possible.

If you go through a lot of cakes and wish to make a bigger dry mix just double the ingredients listed. I say approx in how many cakes it makes because sometimes I make a 1 1/2 amount of cake mix to make a larger cake in a big tray. My mum likes a smaller cake so I halve the dry and wet ingredients for her much smaller tin. 1 single batch makes about 8-10 cup cakes. Yes you can freeze the completed cooked cake. Because I make variations on the amount of cake mix used so far I've not finished the bulk mix in an even amount. I just make up more and add the old to the new. Yes you can add choc chips or coconut or dried fruit etc, treat this mix like the average packet/box mix. Any questions I'm happy to answer them. 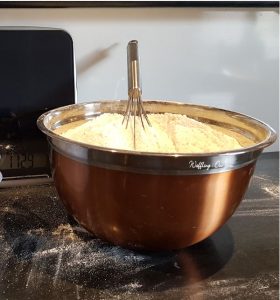 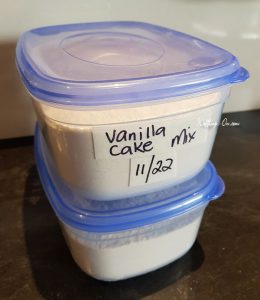 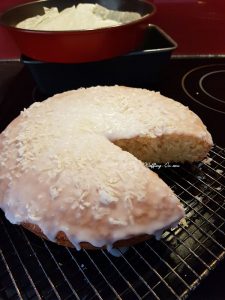 I’ve never seen them in store over here unless they are in a Cost-co that I refuse to pay a membership for.

So I decided to experiment and freeze my own shredded potatoes.

I peeled half a dozen mid sized brushed (dirty) potatoes.

Put them through my food processor with the grating/shredding blade.

Placed the shreds on several clean tea towels and squeezed all the moisture out, as much as possible.

On 2 large lined baking trays I spread them out, placed them in the oven for 5 minutes. I took them out and forked them over and shuffled them around. I did the 2 trays on 2 racks at the same time rotating shelves at the same time. 2 lots of 5 minutes. They will be sticky as they still have some starch in them.

I then put the shreds on a wire baking rack (grid style). Cooled for 5 minutes.  I placed in the freezer in a plastic (food safe) bag still on the wire rack until mostly frozen.

Placing the shreds in a labelled and dated Zip lock bag with the air still in. When frozen I jostled them all around and squeezed out all the air to keep for safe freezing. 2 trays in 1 zip lock bag.

-With the shreds so far I’ve only done potato nests  which were quite crisp and tasty. I defrosted the potato on paper towel to take away any condensation moisture.

-Roughly taking  a cup full of shreds to place in a bowl I  seasoned with salt and pepper.

– Into a shallow frying pan add enough oil to cover the bottom of the pan and then a bit more. Once heated place a handful of shreds into the pan and give a little pat being careful of the hot oil.

-Once nicely browned on one side flip over and do the other side. Drain on paper towel.

*Note the more oil the more crisp they’ll be.