I’ve never seen them in store over here unless they are in a Cost-co that I refuse to pay a membership for.

So I decided to experiment and freeze my own shredded potatoes.

I peeled half a dozen mid sized brushed (dirty) potatoes.

Put them through my food processor with the grating/shredding blade.

Placed the shreds on several clean tea towels and squeezed all the moisture out, as much as possible.

On 2 large lined baking trays I spread them out, placed them in the oven for 5 minutes. I took them out and forked them over and shuffled them around. I did the 2 trays on 2 racks at the same time rotating shelves at the same time. 2 lots of 5 minutes. They will be sticky as they still have some starch in them.

I then put the shreds on a wire baking rack (grid style). Cooled for 5 minutes.  I placed in the freezer in a plastic (food safe) bag still on the wire rack until mostly frozen.

Placing the shreds in a labelled and dated Zip lock bag with the air still in. When frozen I jostled them all around and squeezed out all the air to keep for safe freezing. 2 trays in 1 zip lock bag.

-With the shreds so far I’ve only done potato nests  which were quite crisp and tasty. I defrosted the potato on paper towel to take away any condensation moisture.

-Roughly taking  a cup full of shreds to place in a bowl I  seasoned with salt and pepper.

– Into a shallow frying pan add enough oil to cover the bottom of the pan and then a bit more. Once heated place a handful of shreds into the pan and give a little pat being careful of the hot oil.

-Once nicely browned on one side flip over and do the other side. Drain on paper towel.

*Note the more oil the more crisp they’ll be.

* Have the oil hot enough that it starts the cooking straight away but not too hot that you’ll burn the edges of the potato shreds before it’s cooked through.

My next experiment will be to see how they go on a shepards pie.

I also want to see how they go as a quiche type thing.

Do you buy pre shredded potatoes or already do this yourself, it’s all new to me. 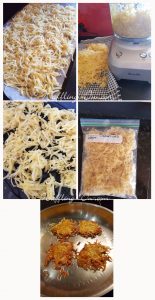