What do you call a cross between a bounty bar and a brownie?  A Bounty brownie.

I made my brownie this morning and left it cooling in the tray.

While I let my brownie cool I made up my chocolate bounty ball  recipe.

When my brownie was about 1/2 cooled I carefully spread my coconut bounty mixture over the top of the brownie. Just be careful how hard you press, firmly but not hard. Let sit.

While the bounty brownie is sitting I melted my dark chocolate. If you’re comfortable melting about 100grams of chocolate in the microwave go ahead and do so with about a dessert spoon of coconut oil or butter. I prefer to melt my chocolate the bain marie way by putting a bowl over a saucepan of water on medium, stirring every minute or so until just melted, DO NOT LET WATER TOUCH YOUR MELTED CHOCOLATE. I like this way as the chocolate has less of a chance to overcook and seize.

Spread your melted chocolate all over you coconut mixture and let sit on the bench for 10 mins then pop in the fridge.

Cut up your bounty brownie with a sharp knife that has been in hot/boiling water, quickly wipe off water and cut doing this several times. You can try cutting your brownie just before popping in the fridge when the choc is not as hard but it may bleed down the sides into your coconut.

Store in the fridge.

Try the other brownie recipes if not this one, there is also a prune brownie or a nutella brownie, you choose and let me know how those versions went.

Be careful it’s quite rich and a small piece goes a long way. Enjoy! 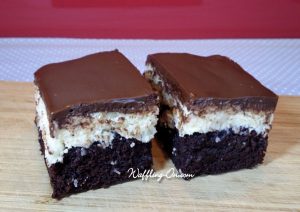