My nut and seed squares experiment

We have a dessert here in Australia called  Choc ripple log, which is Chocolate ripple biscuits (by Arnotts) sandwiched together with whipped cream and laid in dish.  It’s then covered in more cream, smoothed out into that long log and topped with grated chocolate.  There are many variations on the use of other biscuits or will I use  coffee or liqueur to  dip them in sort of like a tiramisu.

While I was ferreting around in my pantry the other day I found a chocolate pudding mix. Upon checking out the back to see how much milk I needed for the pudding,  I found a recipe for something similar to the choc ripple log using the pudding instead of the whipped cream. I had no biscuits.

My version of this is ….

Finding chocolate cake in the freezer I sliced it into strips then spread with pudding mix. It was easier to spread when cake was still semi frozen.

The spread strips were  sandwiched together and fit into a serving dish then spread with more pudding mix over the top. Cover in sprinkles, coconut or grated chocolate. Cover with cling film and refrigerate for at least 2-3 hours. The cake does not need to soften like the biscuit version.

Cut and serve with fruit and cream or ice cream. 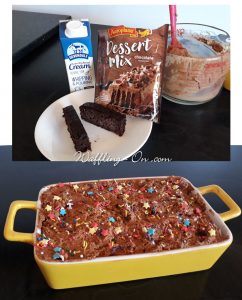